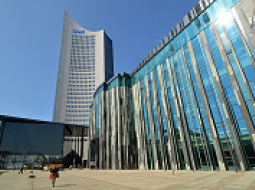 We are proud to announce that the 12th edition of the SEMANTiCS, which is a well known platform for professionals and researchers who make semantic computing work, will be held in the city of Leipzig from September 12th till 15th. The event is hosted  by the University of Leipzig and is supported by InfAi e.V. and the Semantic Web Company.

Leipzig, already celebrating its 1,000 years anniversary in 2015, recently gained growing international recognition, due to the famous New York Times and The Guardian articles from 2014 which appoint Leipzig as the “New” or “Better Berlin”.

After being declared to be the capital of depletion, as thousands of people migrated during the 90’s , Leipzig recovered and rose to be a cultural hot spot in Germany.  With its incredible boom during the past 10 years more and more people moved to Hypezig not only because of its mix of long traditions and rich culture, but also because of its vibrant creative art, music scene and charismatic flair. The list of features that help Leipzig to life up to this reputation is sheer endless.

Speaking of traditions. The success of last years’ SEMANTiCS conference in Vienna with more than 280 attendees from 22 countries proves that SEMANTiCS is already an established transfer-oriented summit for semantic web enthusiast. This years’ event will continue the tradition of bringing together information managers, IT-architects, software engineers and researchers from organisations ranging from NGOs, through public administrations to some of world’s largest companies who discuss recent developments in various fields of the semantic web universe.

Our program is currently still under construction, yet today we can already reveal so much: under the motto SEMANTiCS - The Linked Data conference, the projects LEDS and DBpedia will featured. In dedicated sessions, current research and developments in the area of Linked Enterprise Data Services and Public Data Infrastructure will be presented and discussed by scientist from the University of Leipzig and their project partners.

This was SEMANTICS 2017
13 out of 370 Voices
Vote for the best Industry Contribution
A brief talk with keynote speakers Aaron Bradley and Eamonn Glass
Andreas Blumauer of gold sponsor Semantic Web Company: "Semantic technologies help organisations to substantially reduce its dependency on specialised IT professionals"

Ontotext is a proud sponsor of the conference with CEO Atanas Kiryakov impatient to meet you in Amsterdam
Kadaster can be characterised as an information organisation a lot of datasets and information are available at platforms and are connectable
Will semantics help disentangle the Gordian knot of Big Data in animal health
Mario Campolargo of ISA2 sees Semantics 2017 as an opportunity to go on expanding the map of semantic interoperability
DBpedia, an open project with an inclusive model.
Keynote speaker Nathalie Aussenac-Gilles about knowledge extraction and ontology engineering
MarkLogic: multi-model NoSQL database
Ordina - one of the first major IT companies in the Netherlands with focus on Linked Data

This was SEMANTICS 2016
European Linked Data Award given to Projects in Education and Legal Sector
Enriched Industry - Special Sessions
Where will we stay with semantic technologies in 10 years time?
Get to know our Gold Sponsor Ontotext with its current project Pheme

How to turn your company’s content into information - Gold Sponsor Mekon Ltd.
Taking data quality assurance as an opportunity and not only duty
Attend and contribute to the SEMANTiCS 2016 @ University of Leipzig
How to discover hidden semantics in multimedia content - Gold Sponsor MICO Project
How do semantic technologies enable the Internet of Things?

How to enrich media with semantic data models - 3+1 Feature w/ Keynote Speaker Michele Pasin (Springer Nature)
How to move business intelligence to the future – Gold Sponsor Semalytix GmbH
Where is the Semantic Web leading us to? A quick overview.

How to integrate your silos and command your Data! - Gold Sponsor eccenca GmbH
3+1 Feature: How Semantic Technology Will Change Our Present Perspective of the Past - Keynote Speaker Marie Wallace (IBM)
How Natural Language Processing will change the Semantic Web
From Taxonomies over Ontologies to Knowledge Graphs
Get to know our Gold Sponsor LEDS - Linked Enterprise Data Services

Join us for days packed with insights and contacts

This was SEMANTICS 2015
ELDC Award: Europe's Crème de la Crème of Linked Data and Semantic Web - 1st European Linked Data Award given
3 plus 1 Feature: Christian Dirschl
Vienna supports businesses
Getting to grips with semantics in enterprise search
MarkLogic and the power of triple stores
How EBCONT uses semantics to improve business workflows
Do not miss!! Utilizing linked geospatial data for your enterprise